An Early Update On Progress 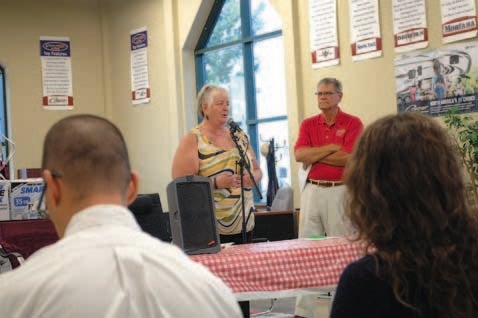 Rod Ruppel, of Webster City RV, welcomed Chamber members to their building, as the business hosted the third quarter coffee event. He gave a brief history of the RV shop, which opened in 1956. The business has seen growing success and is now the top dealer in central Iowa, according to Ruppel.

The coffee meeting also included updates on events and plans from local businesses and organizations. Mark Dohmes presented an update from Webster City Community Theater and discussed the Camp Creamery theater summer camp for children that was hosted this summer. Other updates of interest came from Jill Scott of the Hamilton County Alzheimer's Support Group. She said the first meeting held in August at Fuller Hall was well attended and the group offers those with family or friends affected by the illness are welcome to join.

“People, I think, appreciate this and I certainly appreciate being able to bring this service to people in Hamilton County and surrounding areas,” Scott said.

Dean Bowden, of Webster City Custom Meats, shared details about how the business donated 600 pounds of ground pork to the Upper Des Moines Opportunity Food Bank in Webster City. The meat shop purchased the champion hog at this year's Hamilton County Fair and prepared the meat for donation. This is the second year that Bowden has donated pork and was joined this year by Webster City RV who purchased a hog for donation. Bowden encouraged others in the community to donate in a similar manner.

“My goal is to get it up to 10,000 pounds per year and to space out the donations over the year,” Bowden said. “For the area that it's going into, I think it serves that purpose well. When people donate to UDMO they're really doing something good.”

A new business in Webster City was also highlighted at the event. The El Paisita Mexican Family Restaurant is opening this month on Second Street, west of downtown in the building formerly occupied by Pizza Hutt. Tamara Ferreira of El Paisita was not present at the meeting, but was also noted among the new members who joined the Chamber this quarter.

In total, the Chamber welcomed 13 new members this quarter, including service and recreational groups like the Webster City Rotary Club and the Webster City Women's Club, to businesses like North Central Chiropractic and Walker Insurance. A couple businesses that are run out of the inTANDEM workspace in Webster City, the Jordan and Mahoney Law Firm and The Computer Guy, have also joined the Chamber.

Several businesses also shared news of expansions and moves in Webster City. Mona Everson, owner of Life and Health Care Inc., said that the business moved to a new location in downtown Webster City. Everson said that move was attributed to a growing client base and a strong group of employees. Bob Mason, CEO of Van Diest Medical Center, shared how the center had expanded with a clinic built this quarter in Newton.

The new director of Hamilton County S.E.E.D. was on hand to introduce herself to Chamber members. Sarah Thompson said she comes to Hamilton County with experience at the Iowa Falls Chamber of Commerce and Main Street Program. She has also worked for Main Street Lansing and the Story City Greater Chamber of Commerce. She replaced Catherine Bergman, of Stratford, who resigned after 11 years as director.

“I'm trying to fill her shoes as well as I can,” Thompson said. “I'm enjoying Hamilton County.”

In closing, Chamber Director Deb Brown noted that there is much to look forward to next week in Webster City. WHO RVTV will be in town Wednesday with streets blocked off in downtown to accommodate festivities.

Meredith has an all-encompassing family law practice with extensive trial and settlement experience. Meredith is a certified family law mediator and has mediated custody and financial matters since the inception of the mandatory mediation program in the 2nd Judicial District. Meredith also has a ...

Thank you for contacting us. We will get back to you shortly.

Please complete all required fields below.

Jordan & Mahoney Law Firm, P.C. represents individuals and businesses throughout Central Iowa in a wide variety of legal matters. Our attorneys will explain the legal process, your rights, and provide you with customized solutions to best solve your legal issues.